Episode 71: “Isabella” – Her Parent’s Nasty Divorce and How It Affected Her

In this episode, I chat with “Isabella” about how her parent’s nasty divorce at age 15 affected nearly every aspect of her life. During the divorce, there were literal death threats, as well as lots of other emotional abuse and some physical abuse. Isabella was always a good girl, but found herself doing some things that were self-sabotaging. When she realized it, she worked hard to repair all of the relationships she had lost and kicked the bad ones to the curb. She got pregnant at age 18, married the father, moved away from the small town they grew up in. Isabella shares all the things she learned during those trying times and how she has been able to forgive.*

When Isabella was 15, her mom randomly blurted out to her dad that she wanted a divorce. This caught Isabella by complete surprise. She ran to tell her older brother and all he said was “so?” Looking back, Isabella can see why he wasn’t shocked like she was. Her mom had done a great job at shielding her from all the things that went on. 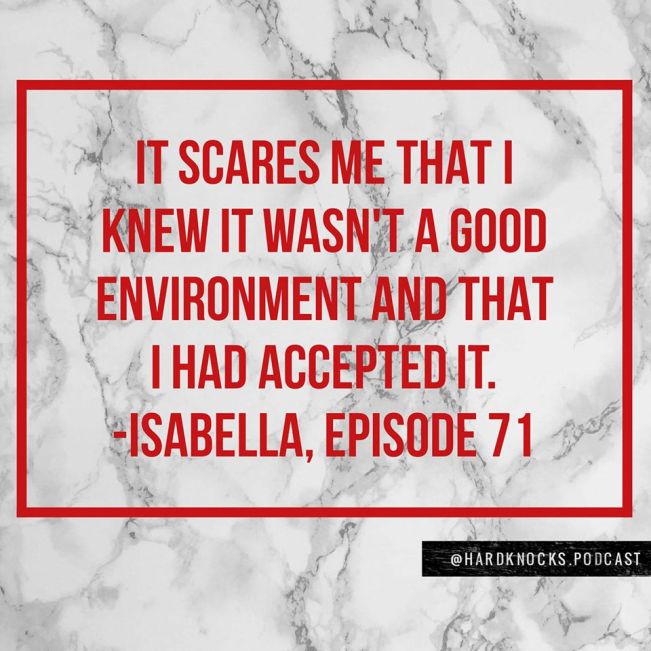 At the time, Isabella and her mom and brothers would go back and forth between their home and their grandparent’s home. Isabella’s dad felt like he had finally convinced her mom to stay, so he went back to work out of state. That was their chance to leave. One day while Isabella was at school, she got a call over the intercom saying to come to the office and that she wouldn’t be back. “I knew that was the moment my life was going to change.” They went home and packed up what they could, as fast as they could. However, during this time, someone had alerted her dad that they were there moving, so he started to head home. On the way, he was calling all of them, but none of them were answering. He was leaving literal death threats on their voicemail, so they got out as soon as they could and went into hiding.

They ended up moving into the Women’s Shelter. Things were really bad at this point. Isabella’s dad would call excessively and leave very mean voicemails. Two things that he said directly to Isabella still affect her to this day – 13 years later.

Isabella found herself being pushed away from her friends because they just didn’t understand. They were more worried about boyfriends and high school dances. “Those things were so insignificant to me.” She started seeking out relationships that were only surface level. She knew certain people would never ask her about what was going on at home. These people were also not the kindest. “I ended up self-sabotaging myself.” But it took her years to realize that.

One day in church, they were going around the room sharing something about their fathers. Isabella was totally freaked out and was literally sweating trying to think of something nice to say. That was a turning point for her because she felt so hurt and betrayed. He once was so good. What changed? She learned from then that she had to mourn who he was once and accept who he is today.

By 18, Isabella found herself pregnant. She knew she was with the man she wanted to marry. They did marry about a month later and he joined the Military. They were able to get away from the small town they grew up in. That allowed them to become who they really are. They didn’t have anyone around that knew them that could hold their “mistakes” over their heads.

Despite everything, Isabella does, in fact, have something to do with her dad today. Once she learned how to control the relationship, she let him in a little bit. But he knows that she can cut him off at any time.

“Just because someone carries it well doesn’t mean it isn’t heavy.”