Episode 66: Brandy Walker – How Growing Up in a Bubble Affected Her Life

In this episode, I chat with Brandy about how growing up very sheltered and gendered (meaning girls did only certain things and boys did only certain things) affected her life as she got older. Once she was 18, she did all the things she’d never been allowed to do. Shortly after that, she found herself pregnant and in a sexually abusive relationship. After a chat with her therapist, she worked up the courage to leave him. She was still doing many self-destructive things and landed in jail. It was after she found out that her daughter had been sexually abused that she finally began to change. Brandy went on to remarry, have two more kids and get her Master’s degree in Social Work.*

When I asked Brandy to tell me about the way she grew up, she mentioned that she was adopted and that her parents tried to adopt for 7 years before they were able to get her, so they were very protective of her. “I grew up in a bubble and very gendered. Girls do this and boys do this.”

When she turned 18, she began to do many of the things she was always told she couldn’t do. Things like drugs, alcohol, partying and sex. Soon enough, she found herself pregnant. The father of her child was very sexually abusive towards Brandy. One day in a therapy session, Brandy was telling her therapist all the crazy things he was doing and then went on to talk about her wedding plans with him. The therapist asked her if that was what she really wanted to do and it had never occurred to her that she had a choice. So she ended up leaving the guy and was now a single mom. 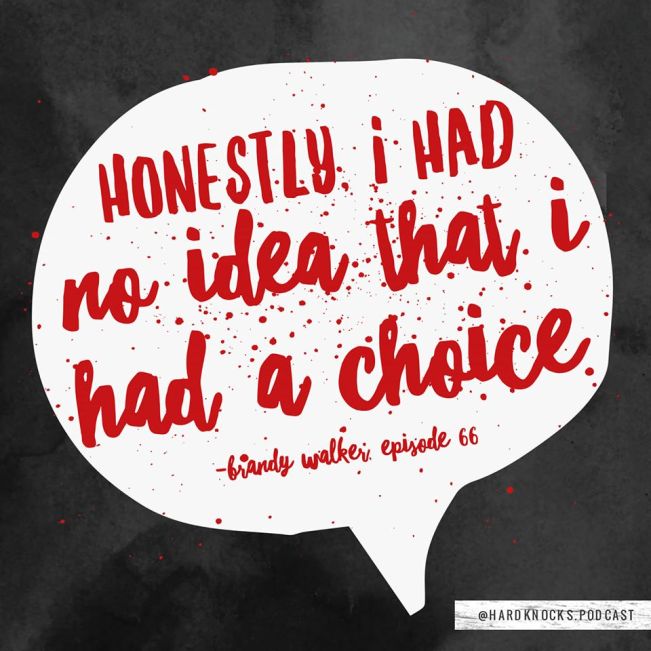 Three months later, she was sitting in a jail cell because she got a DWI. That was a huge wake-up call for her. She admitted to her addictions and got a harsh punishment. A little less than a year later, she learned that her three-year-old daughter had been sexually abused by a family member. Brandy says that was the hardest thing she’s ever been through.

Brandy also talks about having a home-birth with her second child, as well as going on to get her Master’s degree in Social Work and what her jobs is like.

LINKS TO THINGS MENTIONED IN THIS EPISODE:
-Brandy’s podcast: Throwing Light
–Janessa Farrer’s episode and Rebecca Chesley’s episode (both are therapists, as well)
-Brandy’s favorite book: Mister God, This is Anna
-Brandy’s favorite product: Coconut oil
–How to Talk so Teens Will Listen and How to Listen so Teens Will Talk book
–How to Talk so Kids Will Listen and How to Listen so Kids Will Talk book
-My ending song recommendation: My Heart I Surrender by I Prevail (listen on the Hard Knocks playlist on Spotify)
–Brandy’s Instagram