In this episode, I chat with my friend Breanne about the loss of her brother as a teenager, her parent’s divorce that shortly followed, sexual assault of her friend by her father and finding herself while trying to navigate through all of this.*

At 12 years old, Breanne remembers thinking she had the perfect life. Nothing could get any better! Two years later, her whole world came crashing down.

One Summer day after a shower, Breanne’s mom was cutting her hair for the summer in the backyard. That’s when Breanne’s dad walked out and said “they just called. It was Skyler.” Her parents left and told her to stay home. She remembers bargaining with God to please let her brother be okay. Then people started showing up. Eventually, Breanne was able to go to the hospital. There she learned they would be life-flighting him. Once again, her parents told her to stay home. Early the next morning, Breanne’s aunt called and told her to ask a friend’s mom if she could bring her to Nephi. They met there and Breanne’s aunt drove her the rest of the way to the hospital.

Before she was able to see her brother, her dad pulled her aside and told her that he was brain dead. “They’re gonna do one more test, but if not, he’s passed away.” He also told her that she was not to cry in front of her mom because that would only make things worse. Unfortunately, Skyler did not pass the test and he was pronounced dead.

When her parents were planning the funeral, they didn’t let her help with anything, which in turn, made her feel super left out. The first time Breanne cried in front of anyone was when her dad gave her her brother’s gun. Then she felt bad because her mom kept saying that she wished she could take the pain away. The second time she cried was during the family prayer and then when they closed the casket because she knew that would be the last time she would ever see him.

The next month, her parents told her they were getting divorced. Breanne and her mom moved out in September, just a couple blocks away. Her dad had a new woman and her daughter move in and instead of cleaning out Skyler’s room for her, she was given Breanne’s room. So now whenever Breanne went to visit, she’d have to sleep on the couch.

In December of that same year, Breanne had a sleepover at her dad’s house with a friend. When Breanne woke up the next morning, her friend wasn’t there. Breanne’s soon-to-be step-mom said she had gotten sick in the night and went home. Shortly after that, the friend started having some behavioral issues. It wasn’t until March of the next year that Breanne had learned what really happened at that sleepover.

Breanne and her friends went to the police and reported what had happened. Because it was an active investigation, they were not allowed to talk about it to anyone – including Breanne’s dad. One day, he just wouldn’t let it go with her – kept asking what she told the attorney and repeatedly, Breanne would answer that she could not talk about it with him. She tried to escape out the bathroom window, but he picked the lock before she could get out. Breanne ended up leaving the house out the door and before she knew it, he was following her.

Fast forward a little while to High School graduation. Breanne did not put her dad’s name on the card (you know when they announce “Daughter of….”) and that resulted in her basically being disowned by her father and his family.

The second semester of her Freshman year at College, Breanne’s mom had a stroke, so Breanne dropped out of school and went home to take care of her. Her mom would say things like “I’m ready to go. I just want to be with Skyler. There is nothing for me here.” That made Breanne feel really bad and their relationship became strained because she was still here. Did she not matter? 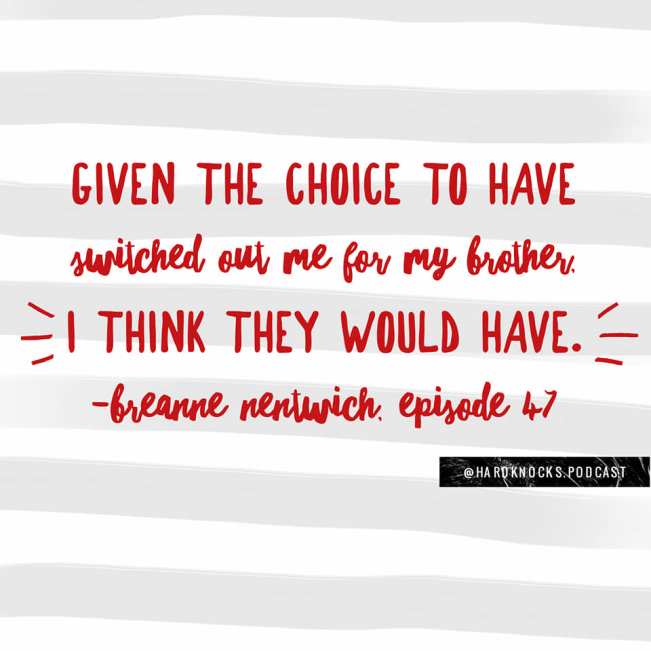 One night, Breanne had the thought of taking a bunch of pills. She thought the world would be better off without her. In the morning when she woke up, she was still thinking about it. Luckily, Breanne realized that was not the answer, but knew she needed to get out of town. She applied to be a nanny and took the first job offered to her. “I honestly think that move saved my life.”

Listen to the full episode for all the details.

KEY TAKEAWAYS FROM THIS EPISODE:
-It’s okay to cry. In front of anyone.
-If you have big news, tell your kids first, before they hear it from someone else. Especially in a small town or close community.
-If you’re struggling, please reach out to someone.