In this episode, I chat with my friend Jenessa about what it was like to be adopted (you’ll get my reference here when you listen) and how she felt when people found out. As well as her being pregnant at 15, a Sophomore in High School, and her decision to place her baby for adoption, which then led to her meeting her birth parents!*

Jenessa’s parents had tried for 10 years to have a baby, with no success. After that long period of time, they were able to adopt and they got Jenessa. Five years later, they did a little “baby hunt” for her, which led to her getting a new sister. Five years after that, Jenessa got a baby brother.

Jenessa grew up knowing she was adopted, so that was normal for her. She always thought it was normal, until 5th grade when someone said something to her about it. At that point, Jenessa felt like she was placed in a separate category than everyone else and started to feel different. Because of this, Jenessa started questioning everything — something she’d never done before. 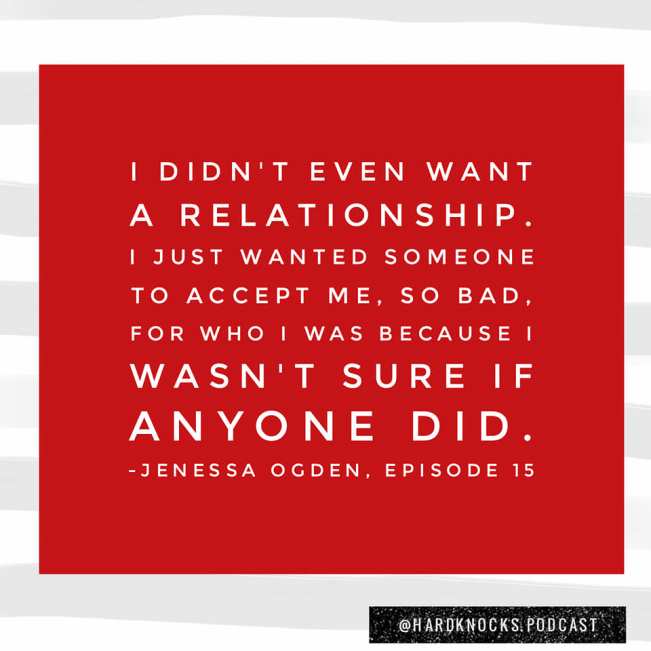 The first day of our Sophomore year, Jenessa went to her Ag. Science class. She was looking for someone she knew to sit by. There was only one kid, but someone else was sitting by him. The person sitting next to the friend realized they knew each other and offered up his seat. They had an on-again-off-again “relationship.” Then the rumors started to fly. Around Christmas time, Jenessa got pregnant. She knew she was. She didn’t even need to take a test. But she chose not to believe it. Jenessa started to pull herself away from everyone because she didn’t know how to talk to anyone about it. She felt like she was in a bubble. She asked a friend’s boyfriend’s friend to get a pregnancy test from his mom’s work. So he did. Jenessa went to his house and took the test. The two pink lines popped up, but she thought she better do one more, so she took a second test. And again, the lines instantly popped up.

Once again, rumors started to spread and eventually her mom got a phone call. Jenessa had called her that day to come get her from school because she was sick. On the way home, her mom kept asking what was wrong and Jenessa felt like she couldn’t tell her. Her mom knew. Jenessa just couldn’t say the words. Once the boy’s parents found out, they had a family meeting and said they only support he was to show to her was him saying “hi” at school. That was it. So Jenessa was alone (aside from her parents) in this.

She battled with what she’d do with the baby. She knew she couldn’t be a good student and mom at the same time at only 15 years old. She did end up going the adoption route, but was struggling to choose a family. They all looked so deserving.

Next, we talked about the crazy story of how she met her birth parents. It all started with MySpace (the good old days!). Her birth mom talked to a young girl about Jenessa a lot and by this time, the birth mom had pictures of Jenessa. So the girl “went all detective” and found Jenessa.

Then we went back to how she picked the family for her baby. It ended up that her aunt and uncle actually adopted the baby. So Jenessa was able to see the baby once a week for the first two years. They keep in contact still and Jenessa knows she’s welcome to Jenna (the baby, although not a baby anymore) anytime.

Jenessa’s junior year, she ended up going to a different school because the biological father of her baby was a Senior at her home school and she, nor her parents, wanted her to be around that. She got a new boyfriend from the new school and her Senior year, Jenessa transferred back to her original school. Things were much different now. People treated her differently – even her closest friends wouldn’t talk to her. Jenessa thought she’d be able to come back and basically pick up where she left off. Unfortunately, that was not the case.

Listen to the full episode for all the details.

KEY TAKEAWAYS FROM THIS EPISODE:
-Talk to your kids about sex. If you don’t someone else will.
-Don’t touch a pregnant woman’s stomach. Ever. 😉
-Be open with your kids, even about the tough stuff.