Episode 4: Carissa Makinen – Dealing with Two Miscarriages and How She Makes Her Marriage Strong

In Episode 4, I chat with Carissa Makinen. I found her on Instagram through a hashtag. You’ll later hear us chat about how great Instagram can be for connecting with others in similar situations, as well as her miscarriages and what she does to make her marriage strong.* 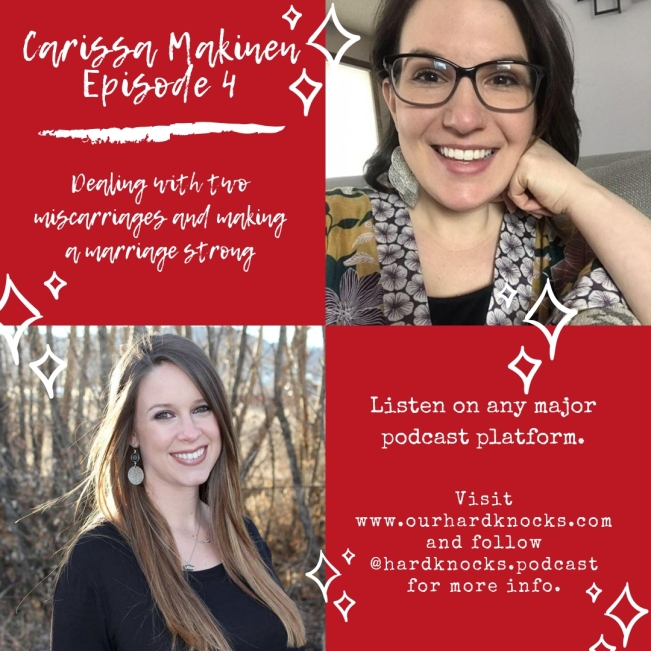 Carissa met her husband in high school, but they didn’t really dive into their relationship until a while after, when they reconnected at a mutual friend’s wedding. They had and LDR (long distance relationship) for about two years before they decided that they needed to take it to the next level.

Once she and her husband got married, they had a five year plan. They were just going to enjoy their time together as a couple. They wanted to travel and explore the world. During this time, they debated whether or not they really wanted to have kids.

In July of 2017, she found out she was pregnant for the first time. Just a few days later, she found out she was miscarrying. Carissa talks about the struggle of knowing what was really going on, as well as telling their family “hey, we were pregnant, but now we’re having a miscarriage.” She shares her self-doubts. “I was ONLY five weeks.” Carissa felt like it wasn’t as important, as say, someone else who was farther along. She opens up about how hard the next month was for her and the fact that she was in a different state than her family. Carissa talks about how she played the blaming game with herself. “What did I do or eat or drink, etc., that week that could have caused the miscarriage?”

At this point, after being totally devastated, Carissa and her husband knew they wanted to have kids. That same year, in December, they were pregnant again. They were so excited! At Christmas, they told their family the great news. They planned to tell the rest of the world after their trip to Europe. Carissa had it all planned out. On the second day of their trip, they’d done a ton of walking and Carissa began spotting. Her mom told her to take it easy the next day. On their way home from lunch the third day, Carissa just knew something wasn’t right. They made the two mile walk back to their AirBNB, which was actually a sailboat… With no bathroom. This time around, she was 10 weeks along. They’d seen the baby on an ultrasound and heard the heartbeat before they went on their trip.

When they got home, Carissa mentioned to her husband that she felt like she needed to publicly share their miscarriage so others would know they weren’t alone.

Upon getting an ovulation kit from her friend, Carissa found out that she was ovulating a week later than she thought she was. As of right now, they still have not been able to get pregnant again, but they are hopeful. Let’s all say a little prayer or send good vibes (whatever it is that you do) to them!

Listen to the episode for all of the details.

Key takeaways:
-Date night is so important to make your marriage work. It doesn’t have to be some fancy date. It can be as simple as taking the dog to the park or just going on a walk.
-You can still live your life and do all the things while trying to get pregnant.
-Be intentional!
-If you have a friend that has suffered a miscarriage, it’s okay to bring it up. Let them know “I am thinking about you and your baby today. Hope you’re doing okay.”
-Be aware of your friend’s behaviors and if you notice something out of the ordinary, it’s okay to reach out and ask how they’re doing.

LINKS:
–Ovulation kits
–Ovia app
–Period Tracker (this is the one I use to track my period. It also has a lot of extra features for moods, symptoms, etc. It will let me know when I’m ovulating. You can put in when you had intercourse, whether it was protected or not, what position, etc. This can be helpful for those who are TTC (trying to conceive). When you do get pregnant, you can switch the mode to pregnant and it will have a countdown, as well as weekly changes that will happen with your body.)
–Random Acts of Kindness (RAOK)/Blessing cards
–My personal Instagram
-Carissa’s favorite book: You are a Badass
-Song that is always in her head: History by One Direction (find it on the Hard Knocks Podcast – Guest Playlist)
–Carissa’s Instagram
-Song of the episode: Redneck Crazy by Tyler Farr (find it on the Hard Knocks Playlist)